The Red Album of Asbury Park Remixed by Alex Austin


I had the opportunity earlier this year in February, of co-interviewing Alex Austin with several members of Le Salon Litteraire du Peuple pour le Peuple in a month long, "real-life, under-appreciated authors" thread held in LibraryThing. Here's the complete interview.

I'd forgotten that I wrote a lot of reviewish/blurbish material earlier this year in another LibraryThing group, Club Read 2010, and so thought, as a way to further help promote a quality novel from one stellar author, I'd copy my comments from January 1, 2010, regarding The Red Album of Asbury Park Remixed. 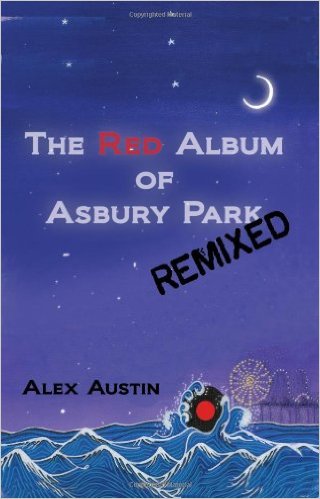 I just finished The Red Album of Asbury Park Remixed by Alex Austin this morning, and am very excited to have "discovered" this unknown writer worthy of a much larger audience. If I were to write a one word review, it would be: "Riveting." Intricate plotting, lyrical prose, poetic language, spot on colloquial dialogue, part mystery, part coming-of-age drama set in the late 1960s, part underworld New Jersey shore odyssey, part carnival ride through Hell (and then Heaven), filled with up-and-coming would-be-rockers haunting the summer clubs and bars, and full of surprising, twist-and-turning narrative resolutions. Austin seamlessly drops in historical events of the time -- the MLK and RFK assassinations, the Tet Offensive, ubiquitous race riots of the era, and music (so much good hippie-era rock references) -- to move the time line of the novel forward. It's a fun, fascinating read. Some novels leave a lot unanswered for and that's probably just as well, while The Red Album does eventually answer everything regarding, "what the hell happened?" and yet still leaves you wanting more. Much more. Can't wait for the promised sequel!