Walter the Farting Dog by William Kotzwinkle and Glenn Murray


What kind of horrible message does a book like Walter the Farting Dog send to our precious children? That it's okay to fart? - and fart publicly? That farting is somehow...funny? Or that breaking wind repeatedly at an opportune time might make you the family hero someday when burglars try to rob your house? 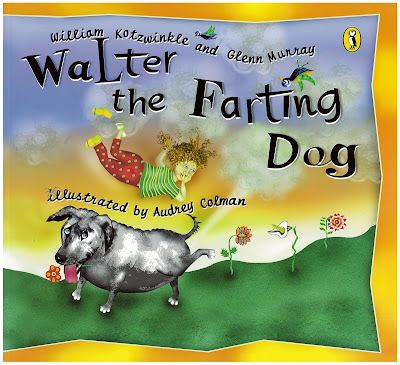 Even my three-year old knows better when it comes to excretory etiquette. When one of his older sisters toots (never me), he immediately goes all wide eyed, and declares, "ewwwww, that's dis-gus-tus!"

And it is disgustus isn't it, especially when you turn every page of Walter the Farting Dog, a supposed children's book for crying out loud, only to see a big 'ol smoke cloud-illustration being rudely ejected from Walter's behind, and then wafting away like some chemical weapon of gass destruction straight into the olfactory centers of Walter's nose-plugging human companions. Thank goodness this book is not a scratch 'n sniff!

When Billy and Betty's father threatens to send Walter back to the pound where, I believe, he rightfully belongs, they boo-hoo something awful as kids are prone to do, not caring, apparently, that their dear dog has turned their parent's home into a veritable fart factory!

Books about cats are just plain classier than books about dogs, anyway, because cats are classier than dogs period, particularly classier than problematically flatulent dogs like Walter. And were a cat ever to fart, which I don't think they do, but if they did, I'm just saying, they'd know to saunter off somewhere and do their business politely, in private, like a woman.

All in all, some kids might like this book (I don't know why) - maybe if you made inappropriate fart noises with your lips or armpits while you're reading it to them, they might like it - but I think, whatever it's worth, that Walter the Farting Dog stinks.