A.M. Homes' autograph (Things You Should Know: A Collection of Stories)

I remember reading Salon's 1996 interview with David Foster Wallace about five years after it'd been published — this was just after DFW had been hired by the Claremont Colleges and the L.A. Times had run an interesting piece on his work and arrival to the university, and my interest in this writer that I'd heretofore never heard of, was immediately piqued; and piqued enough, I might add, that I immediately and rather obsessively went online to learn more about him — in which Laura Miller asked DFW who were the contemporary literary writers he read and admired.

A.M. Homes was at the top of his list (and this despite labeling her first novel Jack as being "imperfect" — as if his first novel had been perfect! — zeroing in on a short story of hers called "A Real Doll" that had particularly captivated him with what sounded like a bizarre mix of satire and social commentary on the sorry state of our culture's disconnectedness.

After reading the L.A. Times story, not only did I then go to Borders the next day to buy Infinite Jest, I also went to get A.M. Homes' first book of short stories, the phenomenal The Safety of Objects, so I could read "A Real Doll".  And I've been hooked by A.M. Homes' perfect, yet twisted, uh, barbs, ever since . . . 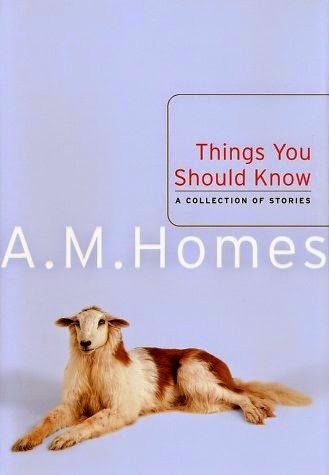 more on The Safety of Objects
more on The Mistress' Daughter: A Memoir