The 1980s: Countdown to Armageddon by Hal Lindsey


I remember reading this in the early 1980s as a recent teenager hot on the heels after finishing The Late Great Planet Earth -- a prophetic prequel to Countdown to Armageddon written in the '70s -- and being hooked by the conspiratorial tone and dire predictions of gloom and doom and apocalypse that were unequivocably certain to occur no later than December 31, 1989, just as the 1970s were certain to be the decade of the Rapture and Armageddon Lindsey had initially predicted would transpire in his first book of contrived "prophecy." 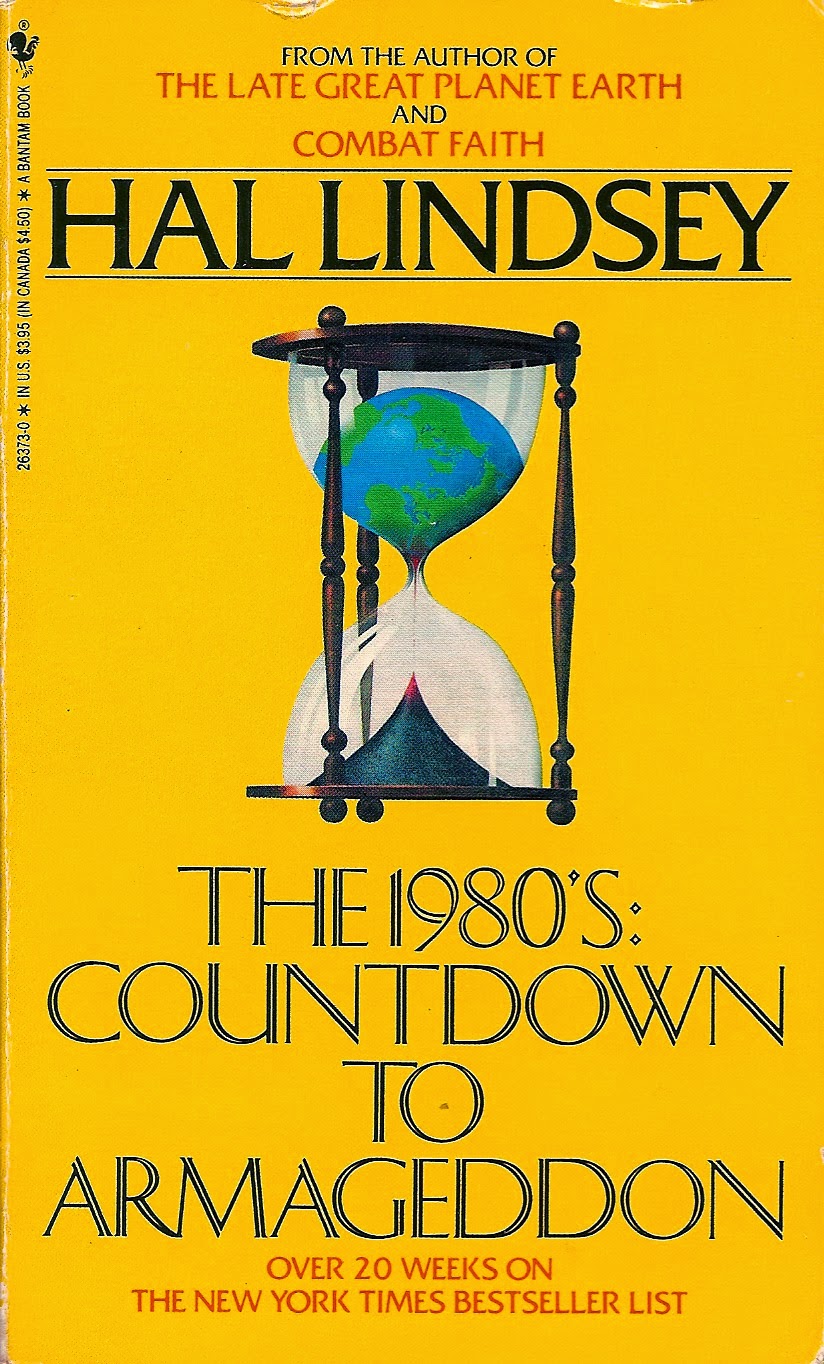 When it comes to prophecy, Hal Lindsey's got nothing on Vegas. He's no different than the Jehovah's Witnesses and their infamous Second Coming shlock, with his false end-of-the-world edicts.

Nevertheless, The 1980s, Countdown to Armageddon, was a good, even fascinating read ... for a fourteen year old dweeb hooked on fantasy at the time (the Thomas Covenant trilogy by Stephen R. Donaldson) but in hindsight, looking back with adult eyes, I'm a bit more than dismayed by Lindsey's -- a reported "reputable" Christian evangelist with his own television audience -- repeated untrue predictions.

It's one thing to be a megolomaniacal nut job and form some U.F.O. cult and herd a horde of gullbile human-bovines out to the desert ranch (sans all their possesions) for the almighty alien's arrival and the glorious impending transformation to a higher plane of spiritual consciousness; but even as bad and sad as that conscienceless con job is, it's far worse, I think, when you're a supposed man of God with flocks of old folks under your "care," tuned into their TV sets, to completely misinterpret the Book of Daniel or Ezekiel or Revelation and imbue prophetic meanings into contemporary happenings in Israel or Russia or wherever, as if those books of antiquity were speaking directly to the latest world crisis, when in fact they were speaking symbolically to events in their own ancient times, Mow-ron! Inexcusable, the fear, and misguided decisions such books elicit in people who placed their trust in the prophetic preacher man on the tube. How many duped people need to get taken to the cleaners before these charlatans get their comeuppance?

"The Concentration City" (1957) is one Hell of a story.  That Ballard named his leads Franz and Gregson and set certain bureaucratic procedural crime dramas around them made me think immediately of The Metamorphosis, but I'm not positive Ballard was intentionally riffing off Kafka here.  And regarding Concentration City's history there's multiple mentions to a time "before the Foundation" millions of years ago, which seems to be a gracious nod in Isaac Asimov's direction.


Franz aims to fly in Concentration City (it was a dream he had) but there's really no room to fly in a city that has no open air space -- not even for a single bird.  Any available space is already occupied with construction.  So he hatches a plan with Gregson not so much to escape Concentration City but to ride the commuter train, a "Supersleeper" that connects the various Sectors and Federations of the city, West for as long as necessary in order to find "Free …

Yesterday, I finally had the chance to visit a local independent bookshop, The Magic Door IV, that I had been meaning to for years, but its store hours (2:00-8:00 p.m.)* had always made it impractical for me to drop by when I had a regular 8-5 office job working for somebody else.  In May, when out of the blue it occurred to me that I had still not patronized the The Magic Door and its hours were no longer an issue, I dropped by on Memorial Day (May 29th), but the store was closed for the holiday.

Undeterred, when Father's Day rolled around three weeks later, I decided I'd go then.  Almost out the door, though, I thought maybe I better call first, make sure they're open.  Sure enough, they were closed for the Father's Day holiday.  They were closed, and yet the owner, Dwain Kaiser, answered the phone anyway and urged me to drop by on Tuesday.  He was adamant that I — whom he didn't know from Adam as they say — drop by the store on Tuesday, insisting as one would …

Considering William Sansom's short fiction was once widely anthologized in frighteningly titled story collections (e.g., London Tales of Terror, Ghosts in Country Houses, The Weird: A Compendium of Strange and Dark Stories, as well as several installments of The Pan Book of Horror Stories), with a novel named The Body, readers already acquainted with his better known, more diminutive, phantasmal forebears, could understandably conclude that Sansom's first novel The Body was likewise macabre.  Honest mistake, that. And perhaps also disappointing for those mystic connoisseurs of the obscure with a taste for Sansom's peculiar style of understated extravagance -- a style similar to yet not quite as distilled as that of those refined denizens of the fin de siècle, nor as baroque as the later Lovecraft crowds he was often lumped in with (peruse any of the table of contents of one of the dozens of anthologies Sansom contributed to in order to better see my point) -- who naturall…

I'm proceeding slowly through The Complete Stories of J.G. Ballard in 2013, and hope to have at least something to share on each story eventually.  There's potential spoilers below.  First story up for study is  "Prima Belladonna" from 1956, a story originally collected in Vermillion Sands.

"Prima Belladonna" is told by an unnamed narrator as a reminiscence.  A recollection of a long-ago, idealized time known in his culture's history as "The Recess," that "world slump of boredom, lethargyand high summer..." that lasted for a decade.  People worked only a few hours per day during this era of ennui, assuming our unnamed leading man is any indicator of the cultural norm, spending their hours not in labor but instead on balconies with beer, playing i-Go, a game described as "decelerated chess," as if chess (for the lay person, not a pro) wasn't slow enough already.

Ballard's got that wry wit going on repeatedly; I really…

The majority of the material for this post is taken from Contemporary Novelists, 3rd Ed., Edited by James Vinson, St. Martin's Press, New York, 1982

"I have no quarrel with the critics. Maybe I am an unredeemed journalist and reporter, masquerading as a writer of fiction. But I have always believed that while the inner life of man undoubtedly is, and should be, the primary concern of literature, thi…

A mighty metal list comprised both of novelty/shock-value metal classics, as well as some truly great metal songs that no one except metal dorks like myself remember, and who still, to this day, without shame or embarrassment, enjoy blasting with the windows down, whether in automobile or home residence (blasting, that is, when my not-so-heavy-metal-sympathetic-but-otherwise-excellent, wife, is not around).  The list is in the order they came to me; it's not a ranked list; it's arbitrary, free-kickass-associative -- Freudian -- in other words, with many crude and crass references to phallic symbols, and this list is just Part I of hopefully many more mighty metal lists to come.


01. Screaming in the Night by Krokus

The best metal band ever to come out of Switzerland in my opinion (and there were at least two!)and this was their finest six minutes and 41 seconds ever.  But like so many up-and-coming metal ban…

The television show our increasingly incredulous man is watching keeps repeating itself, but his wife doesn't even notice!  In fact, while her husband can't get past 9:15, it's almost 10:00 P.M. for her. Our man tries switching channels to escape.  Same result: Rewind.  He calls a quiz show to tell them he knows the question they're going to ask in order to try and convince somebody — anybody — that something very strange is going on with the clocks, that they're stuck in this ma…

Infinite Jest: Some Brief "Year of Glad" Observations, part I

Beginning with the first sentence of Infinite Jest, Wallace is outlining some of its core themes: Detachment, disembodiment, depersonalization, all resulting in disorientation -- a possible source, if I may borrow my LT friend, zenomax's, idea -- of the "realities behind the realities" in Infinite Jest.

Seated at the conference table for his admissions interview to get into Univ. of AZ, Hal Incandenza, in observing the three Deans seated nearby, does not "know which face belongs to whom."  He is uncertain of basic points of reference, where his position is in relation to others, for instance: CTs (his surrogate mouthpiece) location may be in the room, seated "to what I hope is my immediate right" (boldness mine).  Hope?  Hal doesn't know for sure.  Is Hal really "in here," or deceiving himself?

Hal says he is "in here" -- in the conference room -- but he isn't confident nor in control of his body: "Ibelieve I appear n…


Ever since Satan incited Nero to scapegoat the Christians for Rome's burning, and then ordered them massacred in the most barbaric means possible, Satan, so the premise goes, in Jay Anson's, 666, has been operating out of a Victorian mansion framed with the very blood splattered wood of those long ago martyrs.

Why did Satan have his Victorian mansion framed with such gore? Because, according to one of the self-styled satanists in 666, a young man named Lawrence, who's also a bunny and bird sacrificing bozo pretending to be a wholesome church boy on Sundays, Satan's in terrible pain and angst. Agony. And since Satan is in such terrible pain, angst and agony, he feels more at home in his two-story Victorian knowing that his house was literally built, beam by beam -- every blood stained beam of it - drenched in the ancient gore of innocent victims. Supposedly, such architectural accoutrements…