The Orangery by Gilbert Sorrentino

Orange you glad there was a writer named Gilbert Sorrentino, and that he left us so many innovative novels and books of poetry too? 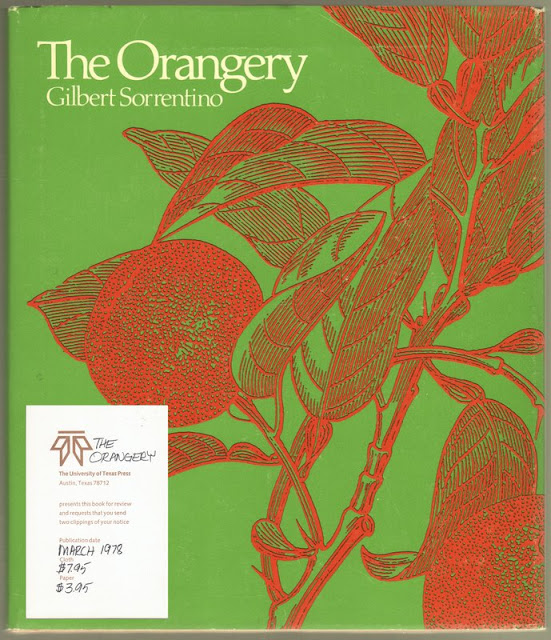 Gilbert Sorrentino obviously had a hankering for orange.  Had he gone mildly orange mad when he wrote The Orangery?  Orange sad maybe?  Obsessed, temporarily, with some orange fad, circa 1978, like the then en vogue burnt-orange of hip interior design?

"Poetry must not be poured into molds / the man said, fighting an old battle / filled with wild alarums. / No one eats oranges / in anyone's poems," Sorrentino observed in "Variations 1," making clear his intent of writing something different.  Poems whose points pivoted oddly, though not awkwardly, around orange.

Note that Gilbert Sorrentino, the author who ingeniously, metafictively, began his most famous book with its very (well, confabulated) rejection slips, all seventeen of them, for Mulligan Stew, wrote this book of poems, The Orangery, styled after sonnets (if not fourteen lines to a poem, then twenty-eight lines, or forty-two, sometimes fifty-six or seventy, but always multiples of fourteen) on "Orange," even though "nothing rhymes with orange" as he related (dismayed) in "Broadway! Broadway!" -- is a truly remarkable feat for such an innovative poet, at least in this enthusiast's estimation, of orange-ineering!

Orange you glad I didn't say "Banana" again, er, that I found this rare, out of print, first printing of The Orangery at my local thrift store for a paltry sonnet's multiple of cents -- eighty-four of them in total, to be exact?