The Satan Seller by Mike Warnke


The Da Vinci Code's got nothing on The Satan Seller in terms of both terrible writing and spurious storytelling. I read this supposed "true" account of a former real life astral projecting satanist, Mike Warnke (I think that's him on the cover and maybe Count Dracula lying down behind him) who was also in league, if you're buying the satanic shtick he's selling, with perhaps the most secret of secret societies, the dreaded (I'm whispering now for melodramatic-sharp-indrawn-breath effect)...Illuminati (oh that dastardly covertly operating Illuminati of Angels and Demons unrighteous priest dismembering infamy) and you'll apprehend an entirely new meaning to the term, "bad". 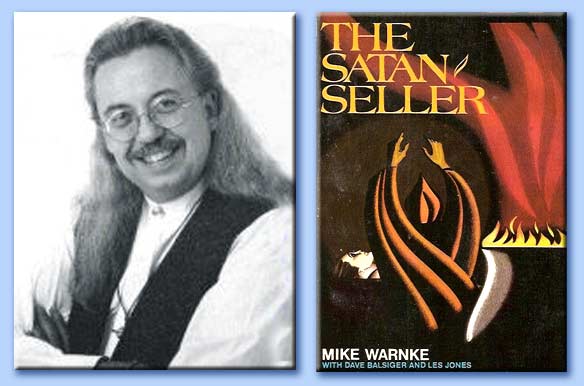 Cornerstone Magazine, a Christian apologetics periodical, pulled the black robe and scary hoody right off of Warnke in their 1992 expose on him, exposing time line inconsistencies and photographs of a rather clean cut Warnke who should've looked all strung out and long-haired-hippieish in the late 1960s, were one to deem his sinister story credible. Cornerstone effectively debunked the minor myth of Mike Warnke, who'd of course, by the time Cornerstone stripped him of his spooky Halloween costume, miraculously repented his former satanic high priestish ritualized baby sacrificing ways and come to see the glorious light of the Lord, accepted Jesus Christ as his savior, blah blah blah, hallelujah (the usual tacky televangelist cliches) and gotten himself as a result of his notoriety and sensationalized, alleged spiritual transformation, a cushy and undoubtedly lucrative gig on what must certainly be the gaudiest, if not ungodliest, television broadcasting network, TBN (Trinity Broadcasting Network) ever launched worldwide.

I read this as a conspiratorial obsessed teenager and swallowed the "based on a true story" bait, hook line and sinker, naive dupe that I was, so I'm peeved and apparently still upset about it. This review has been my cathartic revenge. There, I feel better now.