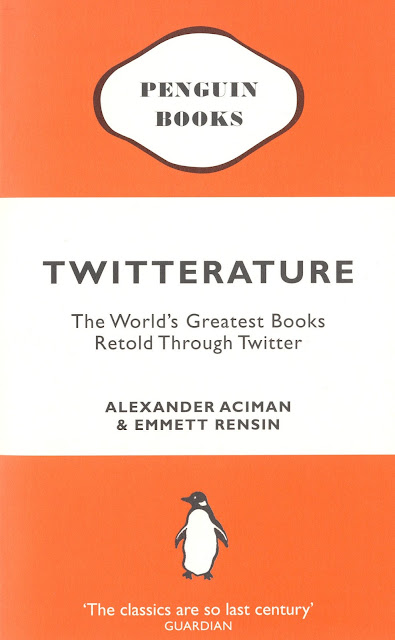 After reading Twitterature: The World's Greatest Books in Twenty Tweets or Less -- at first a nominally amusing read that turned tiresome and awfully unfunny fast once the cutesy tweeting novelty wore off -- it's clear I've missed nothing by not embracing this brave new (and hyper-abridged) culture of the twit, tweeter, whatever.

Twitterature is the classics in 140 characters or less.  Har. Like an evening spent with a bad, linguistically challenged stand up comic.  Irritating.

Twitterature's individual entries are so short they're like Spark Notes to the real Spark Notes of the classics.  Frankly, I'd rather read the real classics.  Unabridged.

It's unfortunate that the made up word, "twitterature," just so happened to rhyme with the real word, "literature," thus making the gimmicky publication of this co-collegiate-authored book of mostly bad gags, possible.

Twitter didn't appeal to me in the least when I read this book six years ago. During the past year, however, I've discovered Twitter can be a useful interface in finding useless but amusing information distilled to its most rudimentary facts, and also for making interesting connections and "meeting" new acquaintances that sometimes become online friends over time. So, Twitter, turns out, five years after I wrote this rant, is semi-okay by me.  But I still believe the book Twitterature sucks. And the edition I read was an earlier edition with a different subtitle -- The World's Greatest Books in Twenty Tweets or Less -- and not the Retold Through Twitter text in the image of the book cover above.