Reading (and Loathing) Amazon.com: Get Big Fast by Robert Spector

Amazon.com: Get Big Fast by Robert Spector tells the scary, loathsome story of an even scarier and more loathsome company, Amazon, that in order to control, manipulate and monopolize everything in the known universe, including all-things-Retail, developed such a foul, exasperating and perverse case of blood lust for mergers and acquisitions, I daresay their insidious behavior would've shocked even the author, William Gaddis, who wrote the greatest satire ever written, JR, on consumerism, capitalism and corporate greed so run amok by a little twerp that everything the twerp touched got fucked up instantly for everybody else.  Why'd the twerp do it?  Because the twerp could do it, that's why. 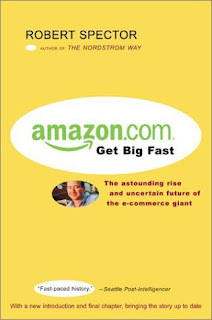 That's the American Dream for you:  Creating Nightmares for Mom and Pop.

While Amazon.com: Get Big Fast does not yet tell the complete story of how Amazon began ruining it for once arguably great (never mind merely Good or okay) social booksites on the internet, and for independent booksellers everywhere, squeezing the life out of those stubborn, archaic brick-and-mortar store owners one by one, like they were so much pus being ejected out of zits on the twerp's big butt, we can only cross our fingers and hope that future, updated editions of the Amazon puff-piece (I mean biography, har), will.

Amazon.com: Get Big Fast shows in disturbing detail how it used to be a jungle out there, until Amazon paved it over.