nicest town we've
come thru since
leaving California
Ice Stations here
thick as Gas
Stations.
Stop 7 till 12 to eat
and let engine cool
Had drove 215 mi
this a.m.
Beautiful farming
country.
In Shamrock
at 2 P.M.  Had drove
285 mi. out on detour
Into Oklahoma
Texola.  Got gas
and ask man about

the time.  He said

We should of run
time up 1 hr. in
New Mex.  Either
in Tucumcari or
Clovis.  So we run
watches up now.
Made it 4 P.M. instead
of 3.
Passed thru Elk
City, then by a
cemetary, where
there was a monument
just north of it.
Jesus nailed to
the cross with
monument of one
person on each side
of cross⁴


In Clinton
Cross Canadian
River, a beautiful
drive among big
trees.  Stop at
8:20 at
Rainbow Camp
in El Reno, Okla.
Had drove 444 mi.
today.
To bed at 10
up at 10 till 4
(skipped line)
Start out at 4:20
Get air in tire
as back one had
started to go down.
Thru Yukon
along river.
Thru Bethany,

Thru Barstow
out of Tulsa at
9:15.  Had drove
152 miles when
we had gas tank
filled.
By KVOO Radio Station
Broadcasting
Thru Claremore
into Vinita Okla
at 11:20.  Mailed
Charley's letter a
__⁷chran's card and
got ice cream
cones there.
In Miami at
12:25. into Commanche
Thru Quapard
Okla. at 12:55


1. (sic.) mirages
2. I couldn't make out the word.  It might be "Olga"? or "Vega"?
3. Wish I had those letters.
4. He had a deep Christian faith (as opposed to a surface or irrelevant faith).
5. Brackets in both cases are his.  One of the only examples in the notebook where he added in text after his initial, "on the road," jotting down of his impressions.
6. Scratched out word.
7. I've yet to decipher the first two letters of the word that ends in "chran's". 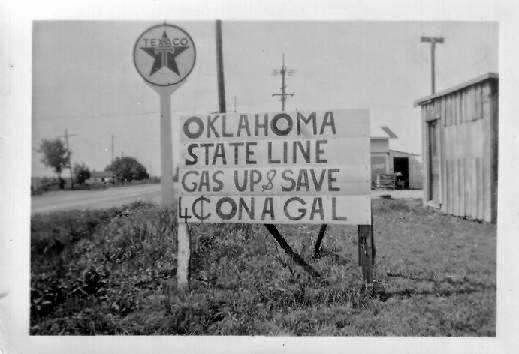