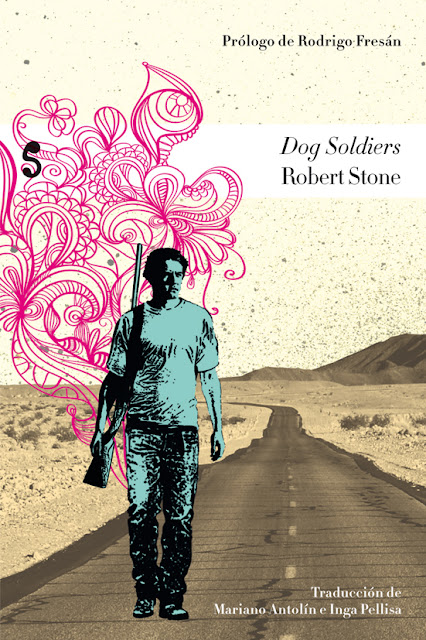 Beautiful book even despite the relentless depravity depicted in the desperate lives of drug smugglers set against a bleak, gritty backdrop during the waning years of the Vietnam War.  So many hard drugs got smuggled out of the Sixties. Too bad peace and love couldn't have been smuggled out of the decade too.

Published in 1974, winner of the National Book Award, Dog Soldiers made a nice dark bookend to the fractured dreams of Woodstock's generation.  It's a black denouement to dashed hippie ideals, a twisted paean to the power of heroin and hash, covert-ops and coverups.  But Dog Soldiers is not dated.  Nearly forty years out, its sordid story still resonates.  For as long as lies, lust, disillusionment, addiction, exploitation, small-time dope dealer's schemes, greed, murder, betrayal, embezzlement, military corruption and law enforcement hubris, remain en vogue in the shadier realms of our already wrecked humanity, so will Dog Soldiers remain universally relevant.  The novel's social realism rings as sadly true today as it did in the smashed Seventies, mirroring a now cracked nation's spiritual demise, its indefatigable decline of optimism and immanence, when its hopes metastasized into something less lovely than freedom or flowers.