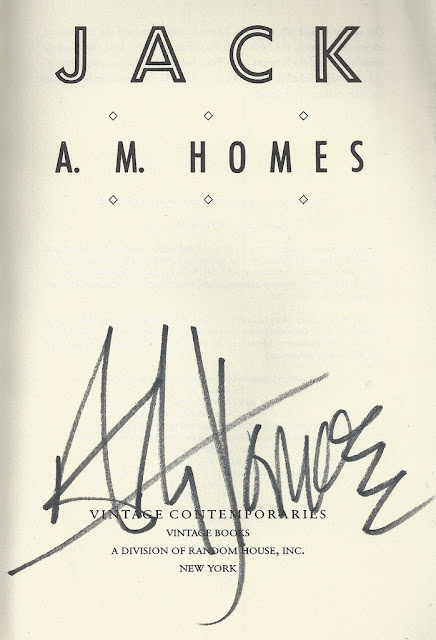 I love her for her novels, yes.  Try reading The End of Alice someday (unless you're chickenshit) and you'll never be the same.  I do not condone, but can understand, why The End of Alice, a virtual hi-def cracked mirror of victimization and depravity — was occasionally banned.  It was banned because it was too damn honest, too damn real.  Positive traits that made it too damn dangerous for some book stores to sell.  The books of A. M. Homes are never safe, and that is another reason why I love her.  Her stories are like razor blades.  I remember having to explain to my clueless ex-shrink one session why my hands were bleeding:  "I've been reading The Safety of Objects by A. M. Homes!"

I love A. M. Homes for her autographs, too.  So far, I have acquired two.  The first A. M. Homes autograph I ever found was several years ago, at a thrift shop, in a first edition of her second short story collection, 2002's Things You Should Know, posted on here.

Note the winsome blurb from a then not widely known (or widely read) up-and-coming literary star himself, David Foster Wallace! Assuming A. M. Homes had anything to do with her debut novel being compared to The Catcher In The Rye on the back cover of the 1990 Vintage Con- temporaries edition (pictured at left), then I love her even more; love her for for her stealth and poetic justice!  The reader may recall that a humorless J. D. Salinger had threatened to sue Homes in 1981 when she was just a nineteen year old college student nobody — a gifted and driven nineteen year old college student nobody, I must amend — with a play about to premiere.  Her play Call-in Hours was set to feature two characters named Holden Caulfield and J. D. Salinger. Under threat of having the play's production stopped promptly by Salinger's legal henchmen, Homes had no choice but to rename the characters.  But, J.D. couldn't do jack about Jack declaring on its back cover that it was "the most convincing, funny, and insightful novel about  adolescence since THE CATCHER IN THE RYE," could he?